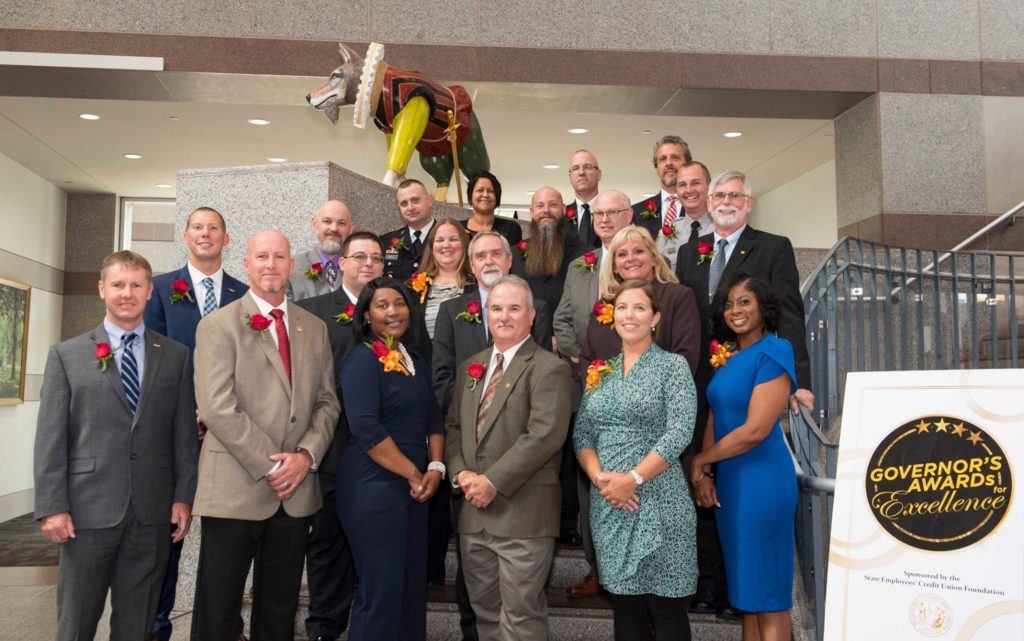 Three NC State employees were among 20 honorees selected to receive the 2018 Governor’s Award for Excellence.

Tuesday, October 23rd, David Josephus- University Architects Office, Finance & Administration, David Setser- Design and Construction Services, Finance & Administration, and Dane Johnston- College of Veterinary Medicine were honored in ceremony held at the North Carolina Museum of History. 20 Honorees from across all state agencies were selected to receive the Governor’s Award for Excellence, the highest honor a state employee may receive for dedicated service to the state and the people of North Carolina. 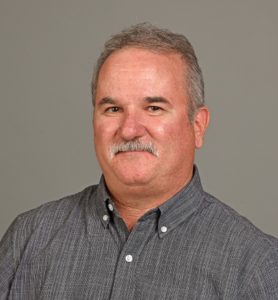 David Josephus works as a Facility Planner in the Office of Finance and Administration at North Carolina State University. In this role, he was able to devise an innovative initiative that has saved the school more than half of a million dollars.

North Carolina State University currently has 240 building identification signs throughout campus. These signs were showing years of wear and tear. The initial thought was to simply replace the worn out signs. But Josephus had a better idea. He realized this was a great opportunity to address some problematic issues.

Josephus noticed that the departmental listings were expensive and time consuming to manage, used costly multiple blades, the red paint faded quickly, and they were expensive to refurbish. He also noted that the lack of a street name was a safety issue, and that three different sign types with complicated construction meant a higher amount of labor to maintain.

Josephus saw the potential to change for the better. He redesigned the signs, making them simpler and easier to repair. His new design includes addresses and street names to improve wayfinding for visitors and first responders. The new signs are also more durable and less costly to install and replace. The white background with red vinyl lettering offers improved legibility. These new signs also improve fade resistance which will extend the life of each sign.

The new signs are projected to save the university $475,000 in material costs during replacement and $25,000 in annual maintenance. Furthermore, since Josephus completed the signage manual update in-house, he has already saved the university $35,000 in consultant fees. David Josephus has proven to be an invaluable member of his team, North Carolina State University, and an outstanding employee for the state of North Carolina.

As the Director of Continuing Education, Dane Johnston oversees all continuing education programs and public outreach efforts for the College of Veterinary Medicine (CVM) at North Carolina State University. Over the past two summers, CVM has completed renovations to its two largest classrooms. The rooms were gutted, including the desks that students in the college from 1981 to 2016-17 had used on the path to earn their Doctor of Veterinary Medicine degree. The original wooden desktops were destined for dumpsters before being hauled to a landfill. That is, before Johnston devised an ingenious plan to salvage them.

The wood remained in such excellent shape that Johnston had the idea of turning the salvage into cutting boards. He thought the desktops could be cut into two different sizes, treated to protect one side, branded with the college logo and sold. He marketed these cutting boards to alumni with the idea that graduates could own a piece of college history and simultaneously provide financial resources to current students.

As of late February 2018, the cutting board initiative had raised more than $25,000, or around 125 cutting boards, for the student enhancement fund. Johnston adhered to one of the university’s tenets about good stewardship of the environment: reduce, reuse, recycle. His idea enabled him to engage alumni and give them an opportunity to reconnect with the college.

Johnston’s actions embody the university motto of “Think and Do,” as this initiative raised substantial dollars that can impact student life at the college. His actions portray unity in thought and action to create prosperity for all. Dane Johnston has earned the Governor’s Award for Excellence by implementing his idea of turning desktops into cutting boards and using this project as an extremely successful fundraiser and alumni outreach effort. 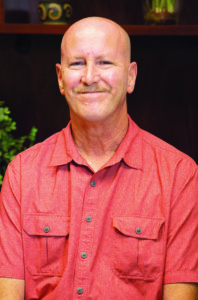 Truck driver, HVAC Technician, HVAC Supervisor, Plant Maintenance Supervisor, Construction Project Manager, and project closer. These are just a few of the roles David Setser has taken on in service to the North Carolina State University Wolfpack. However, this service ethic does not end at work; it applies wherever Setser goes.

On October 11, 2017, Setser was on his way to work when he observed a pickup truck stopped on the side of the road. One of the occupants was waving to get his attention, so he stopped to offer assistance. The passenger had suffered an apparent cardiac arrest. He was not breathing and had no detectable pulse. David immediately moved the victim to a flat surface to begin CPR. He maintained cycles of rescue breathing and chest compression until an emergency management services crew arrived to take over. The victim regained and lost a pulse twice before EMS was able to transport the victim to the hospital.

Although humble about his actions, Setser’s knowledge of CPR and quick thinking helped save a life. Setser encourages everyone to take basic first aid, noting that you never know when you may have the chance to help someone. Setser is not afraid of a challenge and is willing to get involved and help others whenever he can. We are thankful to have David Setser as a state employee at North Carolina State University, and we appreciate all he does on and off the job to assist the citizens of North Carolina.