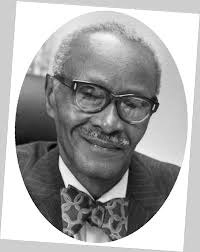 Dr. John Rodman Larkins was born December 24, 1913 in Wilmington, North Carolina where he attended public school and graduated from Williston High School. Under the National Youth Administration Program, Larkins attended Shaw University, where he earned a B.A. in Sociology. He later earned his M.A. at Atlanta University’s School of Social Work and completed his Doctorate at Columbia University School of Social Work.

Dr. Larkins worked paving roads and in the garment industry in New York City, he was a welfare worker in Warren County and, in 1942, he became a consultant for the North Carolina Department of Public Welfare (later named the Department of Human Resources), a position he held until 1962, when he became the coordinator of the Department. From 1963 to 1973, Dr. Larkins served Associate Director of the State Probation Commission; as the director of Youth Development at the Department of Corrections from 1973-74; and was appointed special assistant to the governor for minority affairs in 1977, serving until his death in 1980.

Dr. Larkins is the author of several articles that explore race, community, leadership and sociology. He taught part-time at St. Augustine’s College and Shaw University, served on several sociological associations, and received numerous honors for his contributions to making our state and nation stronger through human and race relations and the understanding of sociology. Dr. Larkins’ legacy in North Carolina is one of hope, trust, hard work and dedication. He believed in his fellow man and worked to improve the lives of others in every aspect of his life.

The John R. Larkins Award was established in 1998 to recognize human service, and is presented annually at the North Carolina State Employees Dr. Martin Luther King, Jr. Day Observance Program. This year, the Award will honor a State employee who exemplifies the same virtues that made Dr. Larkins stand out at work and in the community, and who has made an impact on the lives of others. For more information on this award please visit: http://governor.nc.gov/citizen-services/john-r-larkins-award

Please submit nominations on the form below no later than December 19, 2016